How to Make Sense of Your Pharmacogenetic Test Results

(This post is part of a series explaining pharmacogenetic testing with Prairie, including its benefits and the specific genes that are examined.)

So you’ve sent your saliva sample off to the lab. What comes next?

After your saliva sample has been analyzed, your doctor receives a report breaking down your test results. Here are some things you should know about what they’ll see, and how it will pertain to you:

What & What Not To Expect From Your Pharmacogenetic Test Results

The goal of pharmacogenetic testing (aka pharmacogenomics or PGx) is to determine how you might respond to certain medications in hopes of providing better treatment. As a result, these tests are primarily concerned with a select group of genes that determines how medications are broken down in the body. Because of this, PGx tests cannot tell your family history or predict if you might be vulnerable to certain diseases.

Moreover, don’t expect your test results to directly say which medication will be most effective for you. The field of pharmacogenetics is still developing, but there is no widespread scientific research supporting the use of genetics in making this type of prediction.

How PGx tests do help is by telling your provider what options could be eliminated or adjusted when formulating a customized treatment plan. While your test cannot conclusively say whether fluoxetine (the generic for Prozac) will help you get better, it can help determine an appropriate treatment plan. It might let your doctor know that you might suffer fewer side effects with a lower dosage of a certain medication. In another case, it might encourage your provider to look at different drug options if one seems unlikely to be effective.

Your medical provider will use these suggestions, along with the preexisting guidelines set up by the FDA and Clinical Pharmacogenetics Implementation Consortium (CPIC), to create your personalized treatment plan.

How do I know PGx can help me?

Several research studies have shown potential in PGx testing. One study found a correlation between PGx testing and improvements in those struggling with anxiety and depression. Another stated that conducting PGx testing helped reduce side effects for people with major depressive disorder. The FDA has also supported the use of PGx tests as “companion diagnostics” — supplementing, but not replacing, the prescription guidelines already in place to help your medical provider make an informed decision.

Now that you know what to expect from your test results and how they can help, let’s see an example of a PGx report so you can better understand how your medical provider will read it and incorporate its results into a treatment decision. 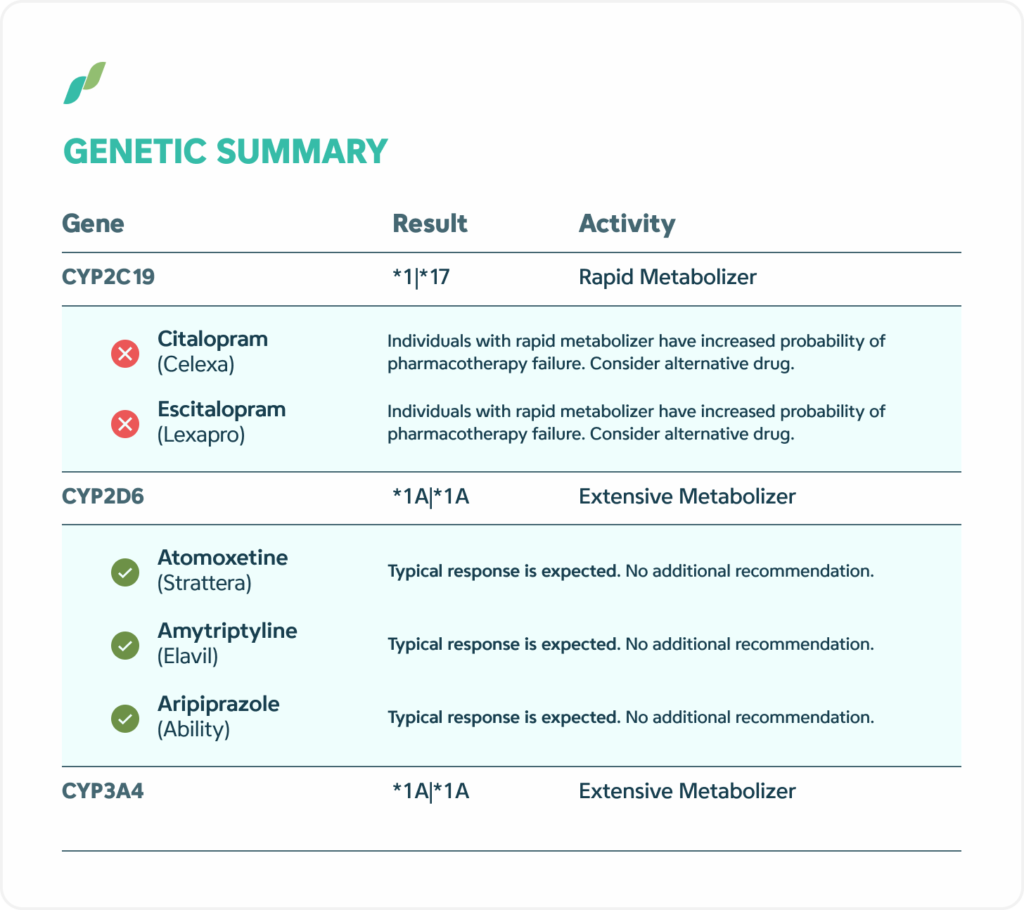 Let’s look at the above example pharmacogenetic report in more detail and break down its various components.

Your pharmacogenetics test is separated into sections by gene tested. Above is a short excerpt from one of our sample genetics tests; the genes listed here are CYP2C19, CYP2D6, and CYP3A4. You can learn more about these genes, along with the other ones examined by PGx tests, here.

Each gene has a corresponding numerical label. For example, under the “Result” column, CYP2C19 has the label *1|*17.

This notation has to do with the gene’s haplotype. The word haplotype refers to the variants of a gene that are usually linked together. For simplicity’s sake, we’ll just refer to this as a version of a gene that affects how it functions.

The number to the right of the vertical line indicates the reference, or most studied (if not most common), version. In this case, the reference version for the CYP2C19 gene is the *1 type.

The number on the right is the version someone actually has. For example, the person who receives this genetic test will have the *17 version for the CYP2C19 gene.

For the genes we look at, different versions create different enzymes that metabolize drugs differently.

Under the final column on the right called “Activity”, there is a descriptor for the haplotype’s phenotype. The term phenotype refers to how the enzyme functions as a result of the genetic variation.

For example, if someone has the *17 version of the CYP2C19 gene like above, they will have a Rapid Metabolizer phenotype for that gene. This means that the CYP2C19 enzyme will break down medications at what is considered a faster-than-normal rate.

The other possible phenotypes are Extensive Metabolizer and Slow Metabolizer, and they break down medications at normal and slow speeds, respectively. You can learn more about the genes Prairie examines and their phenotypes in our other blog post.

Under every gene heading is a list of medications that are affected by that gene. For example, Citalopram (generic for Celexa) is under the CYP2C19 heading; this means that the enzyme created by this gene is known to metabolize Celexa.

Next to each medication is a recommendation based on the allele a person has. The example above gives no specific recommendation for the Atomoxetine (Strattera) because the person with this genetic profile will metabolize this medication normally. Thus, typical guidelines from the CPIC and various other regulating bodies will suffice in helping their provider create a treatment plan.

In contrast, the example issues a warning regarding Celexa; because someone with this genetic profile has an Extensive Metabolizer phenotype, the likelihood of a standard Celexa dosage not working for them will be higher. As a result, the test advises that the doctor consider prescribing an alternative antidepressant.

A PGx test can help demystify the prescription process for both doctor and patient. The doctor gains more insight into how their patient will respond to certain medications and is more prepared to create a customized treatment plan. The patient will have a better understanding of why one medication might be prescribed over another. This helps increase trust between medical provider and patient, which leads to a smoother treatment process. Studies have shown patients seeing reductions in symptoms, healthcare costs, and side effects after taking a PGx test.

Antonia Le is a writer and mental health advocate from San Diego, California. In her free time, she likes playing D&D, going on long walks, and writing screenplays.